Known for it's richness, elegance and meaty broth, the best French Onion Soup boasts super caramelized onions, a crispy toasted baguette and a stringy cheese topping, and while ours honours the traditional, it's the addition of Saisons Beer that adds soul, flavour and funk.

Disclaimer: Our recipe for French Onion Soup is sponsored by The Exchange Brewery Inc. All opinions are our own.

We all have that dish. You know, the one that no matter the restaurant, when you see it on the menu you have to order it. For me it's chicken tenders, and while the majority of the time I'm debating whether or not its appropriate to order off the kids menu, it never fails to cross my mind. For Philip, his always order dish is one he never doubts, and no matter the season, a rich and elegant French Onion Soup always makes its way to our bill.

What is French Onion Soup?

Comfort food at its finest, the best French onion soup is luxurious yet simple, and a bistro favourite that involves caramelizing onions, adding broth, a splash of wine or sherry, and topping it with a cheesy piece of toasted bread. Aside from a list of on-hand ingredients, our keys to a pot of the best French Onion Soup involves patience, time and substituting alcohol for a couple cups of The Exchange Brewery's award-winning Peppercorn Rye Saison.

Brewed as the name suggests, The Exchange Brewery Saison Beer has an exquisite depth of flavour and funk evoked by peppercorns and rye malt, and is the ultimate flavour booster in our French Onion Soup. The tangy and fruity notes, and the spiciness from the peppercorn adds a sour tone to the sweetness of the caramelized onion, contrasting and complimenting the depths of this soup.

Known for its richness, elegance and meaty broth, French Onion Soup boasts super caramelized onions, a crispy toasted baguette and a stringy cheese topping. To eat a bowl of French Onion Soup is to have an experience, and while it may seem like a dish best suited to experienced chefs, our French Onion Soup is a recipe worth sharing and impressing those around your own holiday table with its simplicity and thoughtful flavour combinations.

What we love about our version of french onion soup is the addition of Exchange Brewery's Peppercorn Rye Saison. It has qualities that mimic the wine and sherry you would normally have in the soup. The sweetness of the beer enhances the natural sugars present in the caramelized onions while the tartness and spice of the beer balances the sweetness making for a soup that hits all the senses, and dare I say, an even better version of the classic.

How to Make the Best French Onion Soup:

Melt the butter in a large pot set to medium-low heat. Add the onions, season with salt and allow them to cook down for 30-40 minutes, until lightly browned and tender. Stir the onions every few minutes. Don't rush this step, having nicely caramelized onions will result in a more flavourful soup.

Once the onions are caramelized, turn the heat to medium high. Sprinkle the onions with the flour and cook for 1-2 minutes. Add the Peppercorn Rye Saison and bring to a boil. Scrape any bits of flour left on the bottom of the pan. Add the stock, bay leaves, and thyme. Simmer covered for at least 30 minutes.

This is where the magic happens - creating the beautifully melted, cheesy crust that tops the french onion soup.  For this you need to butter both sides of your baguette slices. Toast in a preheated oven until browned. Using oven proof bowls on a baking sheet, fill them with the soup, leaving about a quarter inch of space. Top with a couple slices of baguette and smother with a handful of Swiss cheese. Switch your oven to broil and melt the cheese until golden and bubbly, about 3-4 minutes. They'll be hot so allow them to cool for at least 5 minutes before serving.

If you know Mystique, then you know she loves soup. Try some of her other favourites featured below.

Helpful Tools for Making Our French Onion Soup with Beer

Below are affiliate links to products that will assist you in making this recipe. If you purchase an item through the links, Chef Sous Chef Inc. will receive a small commission, at no additional cost to you.

Thank you for helping support us through these purchases. If you have made this recipe, please let us know in the comments below! 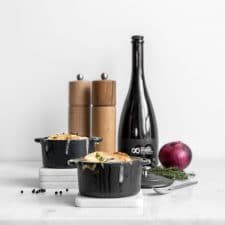