The legendary twice baked potato first caught my attention during my years serving at The Keg. Soft potatoes, salted butter, melted cheese and toasted bacon stuffed in potato skin and baked until a crisp top – perfection.

The Keg was the first place I ever had a twice baked potato. The second was my first time celebrating Christmas with Mystique’s family. For holiday dinners, potluck style is ideal based on the number of family members, with a wide spread of dishes – smoked turkey, duck curry, patties, lasagna, crab dip and twice baked potatoes, as made by Mystique’s aunt Pauline. Mystique and I were always in charge of dessert. One Christmas, we decided to trade our dessert duties for twice baked potato duties. I knew it was a big job to take on, but I also knew I could replicate my first time spud at The Keg. Butter, heavy cream, sour cream, cream cheese, bacon, chives, monterey jack, cheddar, mozzarella – approved by the family, I was immediately designated the the twice baked potato maker.

Then Mystique’s diet changed, and she could no longer tolerate lactose. Instead of making a separate potato for her, I decided to change my recipe to a lactose-free recipe, subbing all cow’s cheese for chevre and goat cheddar. I am confident enough to say that this crucial change in ingredients elevated my twice baked potato, surpassing that of my first twice baked at The Keg (plus, Mystique’s family seemed to enjoy them more than the buttery cream potatoes).

This past weekend we went to my nieces’ birthday party, and with a wide spread of finger foods, I thought to make mini twice baked potatoes. I make the full size all the time and knew it would be fairly easy to replicate them in a smaller package. I brought 80 to the party of 15 people. It was the last thing on the table and the first thing empty. Give them a try and tell us what you think. 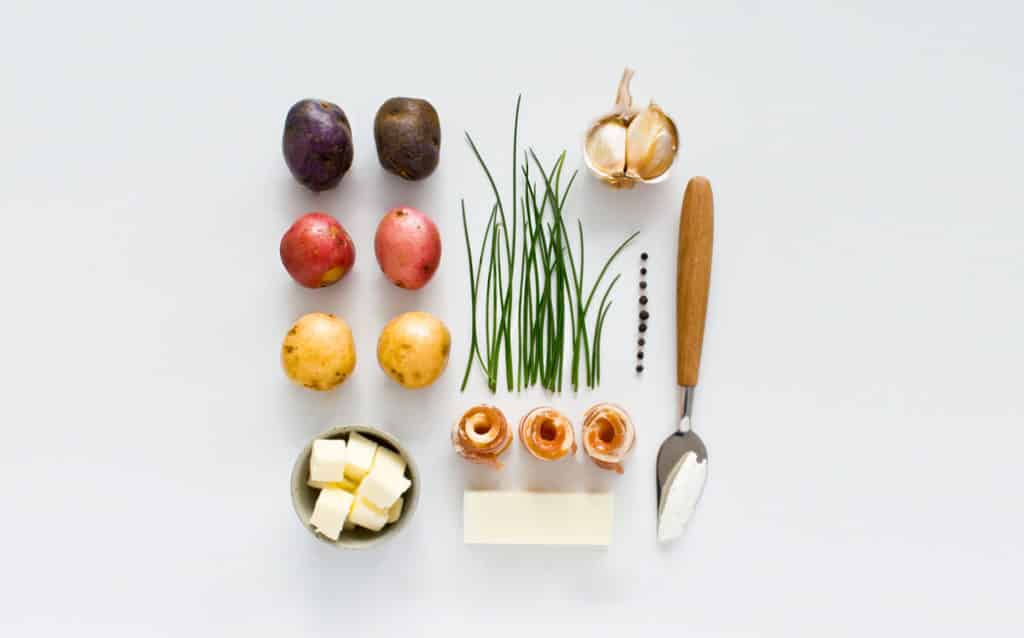 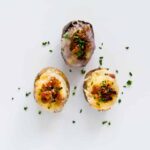 No. 2 | Cut of top of garlic head, place on a piece of tin foil, drizzle with olive oil and a sprinkle of salt. Wrap foil around garlic.

No. 3 | On a large cookie sheet, place clean whole potatoes and very lightly drizzle with olive oil and sprinkle salt all over them. Place potatoes and garlic in oven. Cook for 45 minutes, or until potato skins are golden brown. Set aside to cool.

No. 4 | Roughly cut bacon into squares and cook on medium heat until crisp. Remove from pan and blot with a cloth or paper towel. Once cool enough to handle, finely chop the bacon into small bits and set aside.

No. 5 | Finely chop chives and set aside. Once garlic head has cooled, squeeze the garlic into a small bowl. Ensure to remove any skins which may have fallen in the bowl. Set aside.

No. 6 | When potatoes are cool, cut in half and remove the insides being sure that the skins stay in tact and will retain a bowl shape. Discard your 10 ugliest halves. Run the potato through a ricer (if you have one) and place in a bowl.

No. 7 | In a medium saucepan on medium-low heat, melt butter. Add the all but 2 tbsp of bacon bits and the garlic and allow to warm through. Add potatoes, chevre, 1 tbsp of chives, salt, pepper, nutmeg, cayenne. Season with salt and pepper. Once the mixture is warm and all the cheese is melted remove from heat and set aside to cool slightly.

No.8 | Grate the goat cheddar and set aside.

No. 9 | Using a piping bag or a spoon, place the potato mixture in each skin until just past full. Make sure to leave a divot in the top to hold cheese and toppings.

No. 10 | Top each potato with a generous helping of cheese and sprinkle bacon bits and chives on top.

No. 11 | Heat in oven for about 15 minutes until cheese is melted and just starting to brown. Allow to cool for at least 5 minutes before eating. 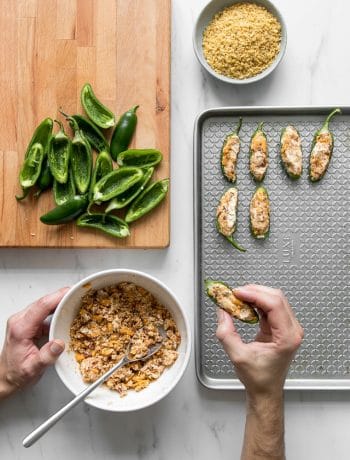 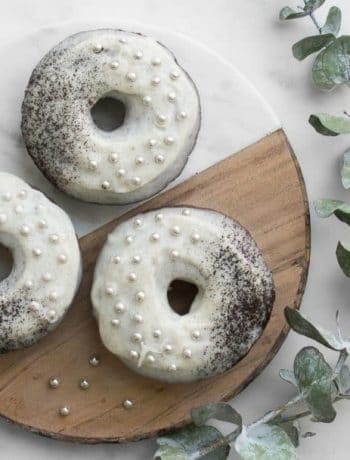 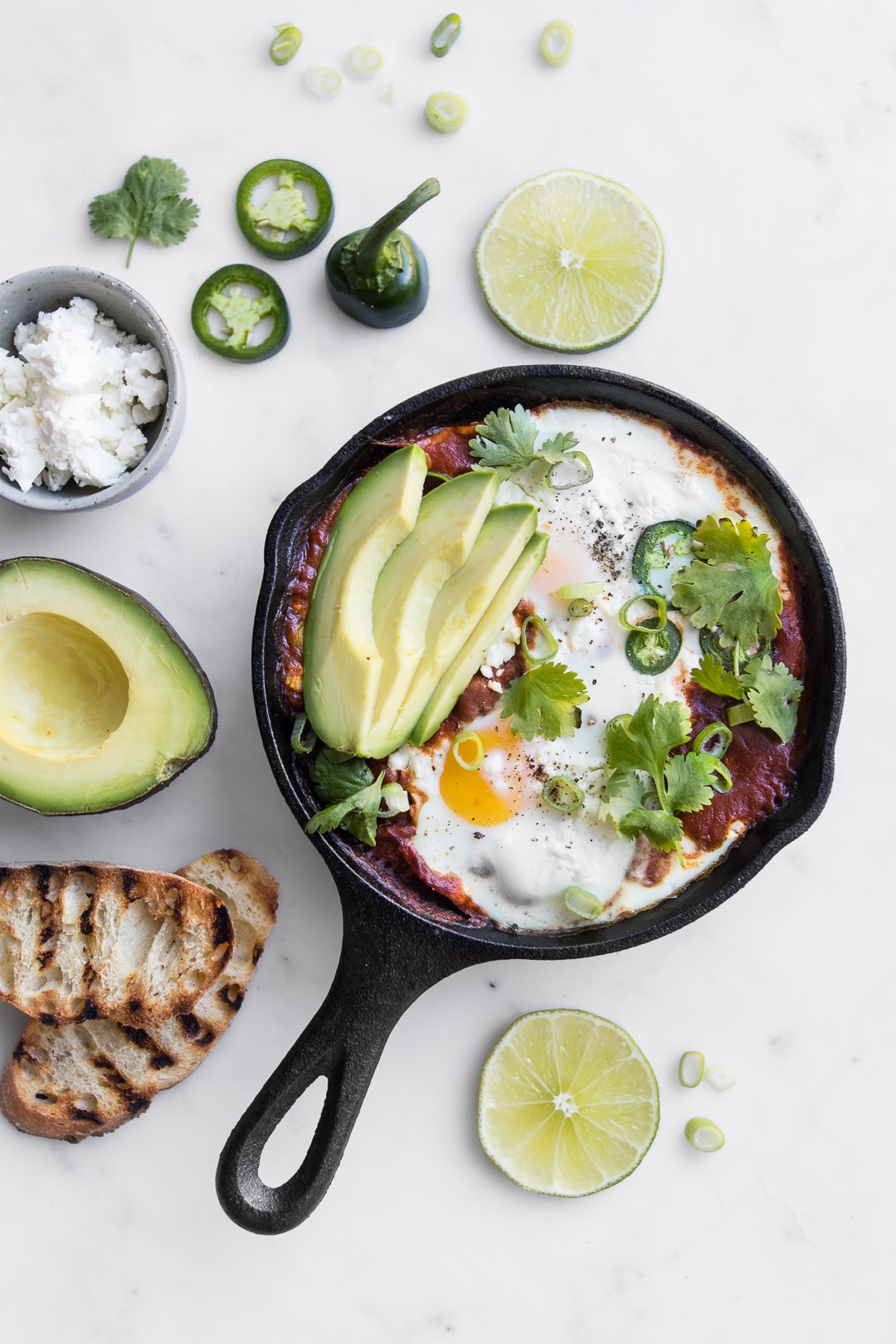 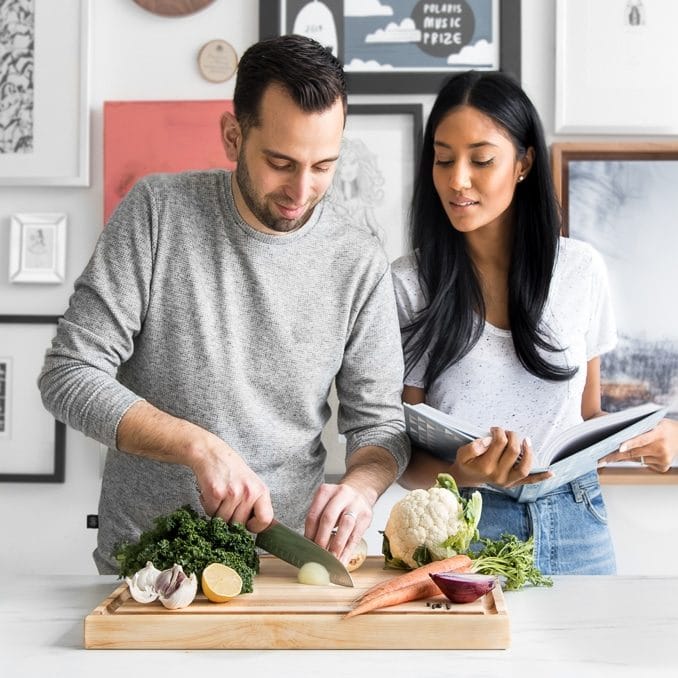 We’re Philip Lago and Mystique Mattai, the couple behind Chef Sous Chef, a Toronto food and lifestyle blog focused on encouraging a love of being in the kitchen, just like us.

A Few Fun Facts About Us

1. We loved the thrill of planning our wedding so much that we started our blog a few days after we got married.

2. We’re writing our first cookbook to be published by Appetite by Penguin Random House in 2021.

3. Neither of us are trained chefs. Philip is the head Chef and Mystique is the assisting Sous Chef in the kitchen.

Designed with Love by Phil and Mystique