This Hummus topped with Dukkah is the creamiest, full-bodied and zingiest you’ll ever taste. With a topping of Dukkah and grilled vegetables you can enjoy it as an appetizer, or meal.

Is there anything more glorious than freshly whipped hummus? And no, store-bought doesn't count. Hummus is a dish that truly embodies the essence that the simplest of ingredients are often at the top of life's pleasures. It's a Middle Eastern dish that has traveled beyond its birthplace becoming a staple around the world and is a no rules dish to creating flavour.

BUT, and we don't say this very often, our Hummus topped with Dukkah is the creamiest, full-bodied and zingiest you'll ever taste. It may be the hummus dish to rule all other hummus dishes and while we can only describe its character, the proof is in the hummus.

Tip: Pinch the skins off the chickpeas before you blend them. It takes 5 minutes but makes the world of difference on the texture of the hummus.

Inspired by  the intimate and quaint Beast Restaurant in Toronto, Chef Scott Vivian's asparagus, hummus, dukkah, charred eggplant snacking plate, evoked a pleasure and passion in us so strong that we used it as a muse, tying their elements of grilled veggies and dukkah with cherry tomatoes, mint and crumbled feta.

The trick though, to elevate any traditional hummus base, is the removal of the skins. Taking 5 minutes to pinch the skins off each chickpea results in a much smoother bite. Tedious we know, but trust us this makes all the difference. Another tip we can offer to elevating your hummus is adding in about a half cup of yogurt. We used sheep yogurt, more tang and less lactose, the yogurt not only adds a luxurious layer and cloud-like texture but replaces the olive oil, making your base less bitter.

Smear your hummus over crostini, cracks or enjoy on a mezze platter. The creaminess of the yogurt together with the spice of the dukkah brings this hummus to another level and trust us, you'll be licking the plate for every morsel. 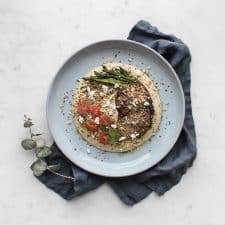 Chef Sous Chef
This Hummus topped with Dukkah is the creamiest, full-bodied and zingiest you’ll ever taste. It may be the hummus dish to rule all other hummus dishes and while we can only describe its character, the proof is in the hummus.
5 from 1 vote
Print Recipe Pin Recipe
Prep Time 15 mins
Cook Time 20 mins
Course Appetizer, Food + Drink, Snack
Cuisine Middle Eastern
Servings 4 -6 servings

Entertaining Tip: For group settings, cut the eggplant into cubes and the asparagus into ½ lengths. Styling tip: Spoon the hummus on a plate or large serving platter and evenly spread it out with the back of a spoon. Serve with chopped veggies, crostini or more traditional with pita bread. Use leftover dukkah to season steak or chicken.
Keyword ChickPeas, Dukkah, EasyRecipe, Hummus, Snack, Vegetarian
Have you tried this recipe?Tag us on Instagram @chef.souschef or use the hashtag #chefsouschef and let us know how it was!
« Toronto Inspired Artichoke, Crab, Kale Dip
Philly Cheesesteak Quesadillas »